Prenatal exposure to the once-popular synthetic estrogen drug DES caused a wide variety of developmental disturbances, including urogenital abnormalities, birth defects, infertility, altered gender behavior and identification, autoimmune diseases, psychiatric problems, vaginal cancer, cervical cancer, and breast cancer.  Damage is now also confirmed in the grandchildren of the women who took the drugs.  Though autism per se is not connected with this particular drug, the DES story provides an illustration of unforeseen multigenerational epigenetic impacts of synthetic hormone exposure.

You can read first-hand accounts of the devastation wrought by DES exposure in this petition to its chief manufacturer, Eli Lilly.  Here is further DES background information from the "Wonder Drug: The Movie" website: 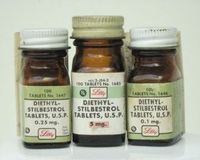 DES (diethylstilbestrol), a toxic and carcinogenic synthetic estrogen, is considered the world’s first drug disaster. It was prescribed to millions of pregnant women for decades: from 1938 until 1971 (and in a small number of cases for several years thereafter) in the United States; and until the mid-1980s in parts of Latin America, Europe, Australia, and the Third World. The currently proven effects of exposure include a rare vaginal cancer in DES Daughters; greater risk for breast cancer in DES Mothers; possible risk for testicular cancer in DES Sons; abnormal reproductive organs; infertility; high-risk pregnancies; and an increased risk for breast cancer in DES Daughters after age 40. There are a number of other suspected effects, including auto-immune disorders, but many of these effects are still awaiting further research.

For decades, Big Pharma claimed DES prevented miscarriages and problem pregnancies. It was sometimes given as an injection, but primarily it was prescribed in pill form. Never patented, DES was marketed under 200 different names, although the majority of the drug was actually produced by Eli Lilly. DES was sometimes even included in prescription prenatal vitamins.
As early as 1938, studies showed that DES promoted cancer in lab animals. But at that time, people thought animal studies only provided a hint of what could happen in humans. Also, no one knew that drugs could cross the placenta and affect a baby in utero. (Note there was a 1941 mouse study that showed mice with absent or deformed fallopian tubes. The warning signs were there for humans.)

No controlled studies were ever conducted by the drug companies to determine the effectiveness or safety of DES for use during pregnancy, even after some scientists started questioning its efficacy in the 1950s. As early as 1953, research revealed that DES did not work – that DES actually brought about higher rates of premature birth and infant mortality – yet DES continued to be prescribed to pregnant women for decades. This is because pharmaceutical companies continued to heavily promote DES use to doctors. The drug was a top moneymaker for Big Pharma.

In the late 1960s, there was an unprecedented appearance of rare cancer in young women. Clear cell cancer (CCA) – a rare cancer of the vagina – was diagnosed in an age group never before found to develop it. (Normally elderly women developed CCA.) There were eight such cases at Massachusetts General Hospital in Boston alone. One of the mothers raised the question of whether her daughter's cancer might be connected to DES exposure in utero. Doctors discovered the DES link in 1971 and published their findings in the April 1971 issue of New England Journal of Medicine. News of the cancer cases made national headlines. However, the FDA did not act on this information until public pressure forced the FDA to contraindicate DES during pregnancy in November 1971.  DES was never banned for human use.

Researchers are now investigating whether DES health issues are extending into the next generation, the so-called DES Grandchildren. As study results come in, there is growing evidence that this group has been adversely impacted by a drug prescribed to their grandmothers.

To this day, not one drug company has ever apologized or accepted responsibility for the DES tragedy. After repeated defeats in court, they have paid millions in out-of-court settlements and verdicts to DES Daughters and Sons who suffered injuries from their exposure.

On February 22, 2011, US Senator John Kerry (D-MA) and US Senator Scott Brown (R-MA) received a 3-page response from the FDA, per their joint letter about a DES apology. The FDA's letter did not contain an official apology from the federal government for the DES drug disaster. However, it acknowledged the devastating health consequences of DES, explained FDA initiatives to prevent future drug disasters, and talked about DES as a "tragedy."

The FDA closed the letter by writing, "We hope that our new tools for identifying, monitoring and mitigating drug risks will prevent other tragedies like those brought out by the widespread use of DES.  We are committed to providing the public with timely and accurate drug safety information and we recognize the critical responsibility that the FDA has to protect the safety of the public’s health."

On January 19, 2012, a federal judge in Boston ordered 14 drug companies to negotiate settlements for 53 DES Daughters who claimed their breast cancer was caused by DES, the anti-miscarriage drug their mothers took decades ago. Because the mediation on April 3-4th was unsuccessful between the parties, Federal Judge Marianne B. Bowler set expedited trial for the first bellwether DES breast cancer case on January 7, 2013.

On January 8, 2013, the historic DES breast cancer trial began.  Plaintiffs the Melnick sisters (defended by Aaron Levine & Associates) took Eli Lilly to Court to hold them accountable for their breast cancer as a result of being exposed to DES in utero. On the second day of the trial, Eli Lilly offered the sisters a settlement.

Note Eli Lilly dominated the DES market (98%) and actively marketed the drug to prevent "accidents of pregnancy." Eli Lilly even published and distributed a book for physicans to capture this market share and failed to warn them of the risks.

Click HERE to view a timeline for the DES drug disaster in the U.S.